A New and Glorious Morn

I walked up to the room just off the library at my law school and saw the recruitment officer seated at a table. I looked his way and called out from the door, “you know I have a law enforcement background and would be an excellent JAG.” (Judge Advocate General) The officer smiled broadly and said, “I won’t ask!” absolutely getting the gist of my comment. I responded, “yeah, but I would TELL.” We held our gaze for awkward moment, then I walked on to my next class. What a shame I thought…he correctly summed me up by appearance, made a judgment (a correct one) then totally excluded me from consideration for the military. Oh yes, you might say I could have signed up …IF I was ready to make one big lie. What a way to start one’s military career….lie to the country you are about to swear to defend and serve.

Truth be told…and this blog is about truth and not lies…..I didn’t want to be in the military anyway, but it stung that I knew I was excluded. I guess my sexuality would have come up a lot in cases that I was prosecuting…and in trial, etc. NOT!! Not once in 11 years of practice has such a topic been an issue in my work. Craziness.

I was so pleased and moved to tears when President Obama signed the bill into law this week ending the policy of discrimination we all know as Don’t Ask, Don’t Tell…..good riddance!! They say approximately 13,500 Americans were discharged under DADT since it’s inception…most of those coming after voluntary admissions. There are soldiers hunkered down in bunkers in Afghanistan today as I write this…on their third and fourth tours of duty because of lack of personnel. Wonder what their answer would be to the following question. Would you mind if a very competent, gay soldier takes your place so you can be with your kids on Christmas day?

Long lay the world in sin and error pining

Senator John McCain proclaimed, on the day of the signing,”Today is a very sad day.” Really Senator? The Senator flip-flops more than breakfast on your local iHop grill. A onetime proponent to end the discrimination, McCain changed his public stance at a time when it appeared he wasn’t going to be able to keep hold of his Senate seat. I will always respect the man for his service to country, but McCain is everything that is wrong with Washington…the old guard.

For yonder breaks a new and glorious morn

I look to the future, the generations that fall beyond mine. I always thought the baby-boomers would be the ones to end all bigotry and discrimination. The generation of hippies, free love, the youthful witnesses of President Kennedy and Dr. Martin Luther King and their march toward civil rights for all. The boomers have sorely disappointed me so I look forward. I now cast my gaze to the generation raised with iPads, Facebook, and digital information. A new generation will lead the way as we become an enlightened people….I hope it comes to fruition in my lifetime.

Chains shall break, for the slave is our brother

In aberration, the italicised comments in this blog are from the Christian based carol, Oh Holy Night. Bryan Fischer of the American Family Association stated in an article published this week that the new Marine motto will be “The Few, the Proud, the Sexually Twisted.” Just wait Mr. Fischer, the children of today are more evolved than you and I and will bring forth great change to our society. My faith is in them, while yours is seated in a hateful and vengeful god….I have many Christian friends who don’t know your god….theirs is THE ONE of overflowing love and acceptance of all children.

Led by the light of faith serenely beaming

I see a serenely beaming light of equality and it is just now peeping up over the horizon. One day I will blog about the end of the Defense of Marriage Act…..and yet another I will expound with great joy and celebration about marriage equality across this great land of ours. 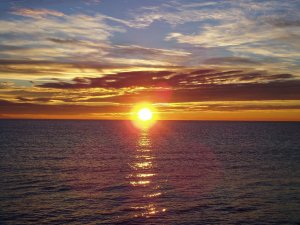 Merry Christmas to you…..and may the light of goodness and equality shine upon our men and women in the armed forces…today and every day. Peace be with you.
A thrill of hope the weary world rejoices,

This entry was posted in Uncategorized. Bookmark the permalink.

3 responses to “A New and Glorious Morn”