Growing Up Juju (part 3 in a series)

Juju and her best friend Kelli were supposed to be running laps around the school yard. The rest of the girl’s volleyball team was far ahead, jogging in a group. The two girls slowed to walk, even though it was September, Fall had not yet come to Texas…it was miserable hot and humid. “Move your butts!!” yelled their coach from her perch at the door to the gym.

Juju and Kelli looked toward the coach and laughed, they waved at her and pretended they couldn’t hear what she was saying. What? What are you saying? Juju knew they were going to get into trouble, it was so unlike her and Kelli to disobey the coach they liked so much. “She is going to kill us,” Kelli said. As they turned the corner and headed for the home stretch, they picked up their pace, but both of them knew it was too late. The coach would have her retribution. They looked ahead and saw the rest of the team entering the gym with the coach…the door slamming behind her.

As Juju and Kelli approached the gym, Juju caught site of a peculiar scene. Her sister Janice’s car was parked in the gym parking lot and there she stood beside it, crying. Janice was 15 years older than Juju and the two had never been particularly close, she would never come to school unless something tragic had happened. Juju trotted up to her crying sister and stated, “Daddy is dead, isn’t he?” Janice nodded her head, Juju got into the back seat of the car and layed down…her head was spinning.

Juju’s other sister, Joan lived two houses down from her, with her husband and their baby girl. Another sister Joyce, lived across the street with her husband and three children. The other neighbors had conceded the street to Juju’s family long ago, they had to, they were overrun. Janice pulled her Chevy into Joan’s driveway and Juju looked two houses down to her home. A black hearse was at her house, she ran into her sister’s house quickly to avoid a sight she did not want to witness.

Juju’s family were seated all in the living room, her mother on the couch. Everyone was crying, her mother kept saying one thing over and over, “I can’t believe this is happening.” Juju sat down in an old wooden rocking chair and rocked back and forth. No tears were coming, shouldn’t I be crying she thought? Fifteen minutes ago Juju was laughing and tormenting her coach…now she had a surreal scene playing out in front of her. How quickly life changes. Juju looked down at her outfit, sweaty t-shirt, gym shorts, and some socks she had to borrow from a teammate having forgotten hers that morning. Juju hunched over and looked down at her socks…her Daffy Duck socks.

For three days friends and relatives filled Juju’s house…and they brought food. Why is it at the time you absolutely don’t feel like eating, people bring it? Juju’s mother told her it was really for the other people who showed up to express their condolences. Can’t they have this party someplace else Juju thought? Can’t they eat before they pay a visit? Juju retreated to her orange shag carpeted room for solace. The carpet still smelled like cleaning fluid from the “mod flowers” incident. Her friends had always thought her father was her grandfather because he had been 49 when Juju was born. She didn’t think he would die on her like grandfathers do though…not when she was just 14. Juju knew that he had a bad heart, she had guessed correctly when she found Janice standing before her in tears. But this was just something that happened in the movies, not in real life. Juju was with her mother on one thing, was this really happening?

On the day of the funeral Juju sat there on the front row beside her mother. She wore a tan blouse with brown embroidery, more frilly than she would usually wear, but it matched the brown slacks. Her mother had not even tried to get Juju to wear a dress, by that time that battle was long over. Juju sat through the service and thought about what her father meant to her. She had refused to go to the visitation the previous day, she didn’t want to see her father laying in a casket. How creepy was that she thought? Why would the adults want a kid to see that? She also thought he should have been buried in his Chef uniform, all starched and nice. Not the leisure suit that he only wore when he was forced to go somewhere fancy…he would hate that.

Juju stared at her mother the evening after the funeral. Jewel looked pretty young, but kids often thought she was Juju’s grandmother too. What would happen if she died too?
As if Jewel was reading her mind, she told her daughter, “don’t worry, I am going to be around a while.” Promise? “Yes, I am promise.” Juju went to bed and thought to herself that she now knew what the term “bone tired” meant…she could feel every bone in her body…she had never been so tired. As she drifted off to sleep she remembered Easter with her father. 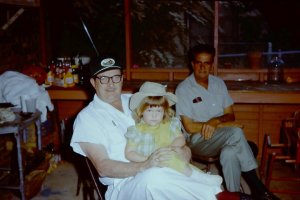 Her father, Jim, was always in charge of hiding the Easter eggs at their house. Juju was a smart child and the bunny story stopped at the age of four, after that she preferred her Daddy playing the part. As the years went on, Juju and her sister Junene, didn’t want the egg hunt to end because they saw how much he enjoyed it. They would get up early and peer out their bedroom window, watching him take careful attention in placing the hard-boiled eggs all over the back-yard. After that he would just scatter the multi-colored sugar confection eggs about the grass and garden.

By the time the last egg hunt came along when Juju was in fifth grade, she had to become a little actress. She walked from location to location…acting surprised at her finds in the usual locations. Never letting on to her Daddy that he had hidden an egg in a certain spot for the past 5 years running….or that she had cheated a peek and saw him hide the egg! Daddy would sit on a folding lawn chair on the back porch, watching the hunt, smiling broadly. After the eggs were all secured, Daddy would call her over and tell her he had one more surprise. He would pull out a big chocolate bunny out of a five and dime sack and wish her Happy Easter. Followed shortly thereafter by, “hey, give your old man a bite of that rabbit!” There was always a time around July or August when Juju would find one of those cellophane wrapped sugar eggs in her mother’s garden. She would run and tell her Dad about her find…the response was always the same. “Well, that must have been a good one. I will have to remember that spot for next year.” Juju drifted off to sleep with that vision of her father in her head…the hunts had stopped a few years ago, but the memories would remain. The holidays would still come she thought, the years would pass….she was going to finish growing up without her Daddy.

The years did pass, Juju started to forget what her father’s voice sounded like, but every once in a while she remembered a small moment. A short conversation would pop in her head, with 100% clarity, that she had enjoyed with him, or she would hear him whistle a tune. Those moments Juju equated with those three-month old eggs found long ago in the garden. “That must have been a good one,” she heard her Daddy say.

This entry was posted in Uncategorized and tagged gay, growing up, queer. Bookmark the permalink.