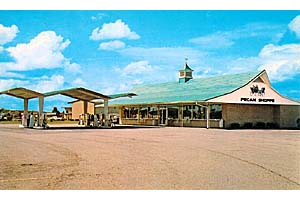 Every trip’s a pleasure, when you stop at Stuckey’s. That was their motto and boy did I buy into it. A trip just wasn’t a trip unless we stopped at Stuckey’s at least twice. In the summer of 1971 we took the mother of all road trips. My parents in the front and my sister Junene and I in the back of a 1970 Cadillac Fleetwood. Traveling at about 75 mph up 35 North, destination…Ottumwa, Iowa.

My father wanted to visit his Aunt Mabel, but mostly we all just liked to hit the road. Ottumwa was our McGuffin, you know the term made up by Alfred Hitchcock? A McGuffin was the thing that drove the plot, but otherwise it was a meaningless thing. Why were the bad guys trying to kill Cary Grant? Because of the McGuffin..did we really care about what it was? No. Would my family leave on the drop of a hat for just about any reason? Yes…as long as there was a Stuckey’s on the way.

I was nine years old and rode wedged up against the back window of the car…like a sleeping compartment. No stinking seat belt needed for me or my sister who was stretched out on the backseat, below me. This was before the national 55 mph speed zone campaign…and it was before the Surgeon General warned about second-hand smoke. We were flying low and we were northbound…all windows up, my father smoking like a chimney. Ah, the good old days!

Thirty-five miles to Stuckey’s! We had the first sign in our sight…my favorite oasis on the highway was fast approaching. At the speed the Caddy was traveling, I would be eating some taffy very soon! Have you begun to notice most of my childhood memories center around food? Yeah, I am seeing that too….when I read them back I get hungry.

Stuckey’s had that good long and flat taffy in all different flavors that I loved so. And the souvenirs were the greatest…Stuckey’s was like the rodeo and Six Flags Over Texas all rolled up into one. You could get any novelty or Texas souvenir you desired…and a hot dog and coke to boot! Was that the teal blue roof ahead? I was having trouble seeing it through the dense reef of smoke hovering over my head…but yes, there it is!!! The teal blue roof is on the horizon, the mecca of childhood road trips! Yes!! 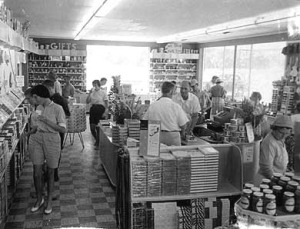 My mother almost ran me over on her way to get her pecan divinity roll. She drank coffee and her caffeine buzz, along with the sugar from the divinity kept her going and at the wheel like the Ever-Ready bunny. High fructose corn syrup was like Crack to my entire family and Stuckey”s was our vacation “supplier.” My father would pump the gas, for 36 cents a gallon, then check out the snack bar. I would go sit with him as he drank a cup of joe and complained that the hamburger he was scarfing down was “terrible.” He didn’t like eating out much because he always compared the food and cleanliness of the restaurant to his own kitchens…they never made the grade.

Junene and I had started a collection of salt and pepper shakers. I think my mother must have suggested it originally to keep us from buying silly toys we would never touch again after a trip. So we bought shakers at every stop instead to take home and never touch again. We had a corner curio cabinet where Junene would take careful attention in placing every new set in the absolute perfect location. As we stood at the check-out I was wondering what she might have in mind for our newest find….a Hill-Billy salt shaker and an out-house that “housed” the pepper….classy. I always called the curio the “crap cabinet” to voice my displeasure over the latest pick.

Stuckey’s had road games you could buy to ease the boredom of long trips. They looked like bingo cards with little orange slide windows that you slid over to cover the individual pictures. They were pictures of things you might encounter on your journey. Railroad crossing sign? slide. Cow? slide. Volkswagen? slide. Police car? Bingo!! If I won I actually got to sit upright in the back seat…woohoo!

That trip we also brought along one of our greatest Christmas gifts ever. We each had a transistor radio with an ear-piece…just one ear-piece. It was an “official” Realtone 6 Transistor with a front cover that looked like it belonged on the dash of a Buick. Junene preferred the harder edged rock at fourteen, but it was my “Carpenters” period. Karen Carpenter was a tom-boy that played the drums and had an incredible alto singing voice. With Karen in my ear and Stuckey’s taffy in my mouth…it wouldn’t have mattered if I went flying out the Caddy like a missile, after a quick stop… I would have died happy!

It was July 6, 1971 when we finally arrived in Ottumwa. I have an incredible mind for bullshit trivia that doesn’t matter to most folks…I have told you that before. I mention it here because that day was a sad one for my father. We heard on the radio that Louis Armstrong had died, Old Satchmo…perhaps the best jazz trumpeter ever. My great Aunt Mabel met us at the gate to her picket fence. She looked like she just walked out of a Norman Rockwell painting.

We enjoyed meeting Aunt Mabel, an incredibly sweet woman, and other distant cousins that trip. Junene and I fed her horses watermelon. We ate corn on the cob, right out of the field…and ran through the cow pastures with youthful abandon. We did ALL of that in about 45 minutes and were ready to get back in the Cadillac! We actually stayed about four days before heading back south…but it seemed like a much shorter turn-around…the McGuffin.

There were three Stuckey’s along highway 35, the path of our trip. On the way to Ottumwa we had talked mother into stopping at two of them. On the way home, I feigned a bathroom emergency and we hit all three! Matching corn cob salt and pepper shakers were now flying with us towards good old Fort Worth.

What’s that red roof ahead I asked? Mother yelled that it was Nickerson’s Farm and NO we were not stopping! It was a restaurant chain started up and dotting the landscape…by a former disgruntled Stuckey’s employee. I wondered aloud if they had pecan divinity…my mother took the exit sharply. There was 245 miles to go, we all needed a fix!

This entry was posted in Uncategorized and tagged 1960s, family, road trip, Stuckey's. Bookmark the permalink.